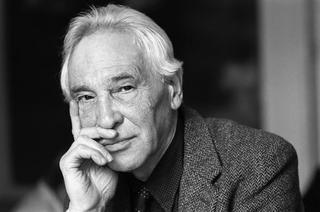 Günther Domenig was a little-known but important Austrian architect who was born in the early years of the Nazi regime and died in June 2012. I emailed Domenig in 2005 when I was writing a chapter of "The Daring Diagonal" that involved the Austrian architect's work. Domenig sent me a copy of a recent book about his work, which proved to be both very stirring and very troublesome. Domenig's engagement with Diagonality cannot be disconnected from his life experiences and it is in that framework that he is described here.

I felt compelled to write to Domenig saying: "I suspect most authors do not send their text to the person whose work they are writing about, but I feel the need to do this on several counts." I explained that I was Jewish, at least culturally, and continued: "You are Austrian and from a family that you yourself identified as having been extremely caught up in the Nazi movement. So, I must be careful (respectful) with you and my readers so that I am not charged with the misdeed of writing from an unfairly Jewish perspective." I went on to say, "So I have been … trying to understand you through your works and through what I have read of your past, and also what I imagine of your past. But it is here that I do not want to falter. I want the deep truth … so I hope you will respond to my writing with total candor and frankness. If I am way off in my … speculation about the various psychic currents that inform or direct your architecture … I hope you will set me straight." Domenig's assistant kindly translated the letter for Domenig 's review and she wrote back saying, "You are on the right way and Mr. Domenig finds your text excellent!"

Günther Domenig was five years old when Germany, under the control of its Austrian-born madman Adolf Hitler, invaded Poland to ignite World War II. Günther's father, Herbert Domenig, was an Austrian judge and in his son's own words, "a radical Nazi." One wonders what psychological scars may have been inflicted on Günther, growing up in a family dominated by a father filled with hate for Jews and a predilection for violent solutions to social conflict, followed by his father's own death by a former victim out for revenge. Günther eventually came to terms with the fact that his father was the willing tool of a vicious political group and that Hitler, another Austrian, had thrust the world into a barbaric conflict of titanic proportions.

Two of Domenig's works are significant in the context of Diagonality. One is a building called the "Documentation Center of the Nationalist Socialist Party Rally Grounds in Nuremberg, Germany." The other is a "residence" he designed for himself—but oddly not for his use—called "Steinhaus" (Stone House). Both buildings reflect his nature in a searing manner.

During Hitler's reign, the Rally Grounds and Nazi Party Congress halls in Nuremberg consisted of a U-shaped complex of connected wings designed by Albert Speer, Hitler's long-time trusted architect. Domenig's design, which alters the original structure, won first place in a competition and was executed between 1998 and 2001. It houses the archives and history of Nazi Germany. Domenig's design impaled the original u-shaped complex with a long, glass-enclosed, corridor-like diagonal spike. The spike, a highly expressive diagonal feature that slopes up from ground level, ripping violently through the otherwise right-angled geometry of Speer's complex, and penetrates several of the old large halls. It seems likely that Domenig felt compelled to thrust a figurative spear through the building and, in turn, to thrust a spear through the very body of Nazi brutality.

The other significant building is Günther's "house," a dynamic geometric sculpture rendered mostly in metal, concrete, and glass overlooking Lake Ossiach near Austria's border with Italy. The house, looking like a sculptural nightmare, presents a menacing demeanor. This startlingly complex assemblage of forms and spaces brings to mind images of Nazi helmets, bunkers, and hatchet blades, and seems embattled and aggressive at every turn. It was never meant to be lived in but was Günther's pure expression of architecture; a place he said was for opera and meetings. He slept in a shack on the site during construction and never lived inside.

This "Steinhaus" is built on a narrow parcel of inherited land. Günther spent his youth there during the Nazi and immediate post-war periods. After studying the rocky topography, he began to explore "architectural smashings" in a series of drawings that endeavor to capture the force of geometry, one of the themes in my forthcoming book on Diagonality. The stark steel and concrete explosion of levitating bunker-like forms was a work in progress right up until Domenig's death. Like Thomas Jefferson at Monticello, Günther continued to add to the composition as time and resources permitted. Curious, of course, is the architect's use of the term "architectural smashings." It is certainly not a term connoting charm, grace, repose, comfort, or peace, terms Thomas Jefferson might have used. "Smashings" is an aggressive term that speaks of energy, collision, violence, and anger. There is a sense of cleavage about this architectural composition, of a mountain of rock exploding into sharp prismatic forms, splitting along psychic and geometric fault lines, producing wedges and oblique planes in contrapuntal dialogue. The forms meet the ground in a stark manner without the softening effect of bushes or trees, much as a piece of sculpture sits starkly on a simple unadorned base. The building is defensive and yet oddly welcoming through a series of stairs and courtyard-like spaces formed between its juxtaposed wings. Domenig worked on the house for 40 years starting in 1980. Some have written about how Bruno Taut's Alpine Architecture, also a key monument in the history of Diagonality, influenced the work of Gunther Domenig.

As if "Steinhaus" were not unsettling enough as a domestic environment in the eyes of someone, like me, used to conventional furnishings such as lamps, comfortable furniture, rugs, and window coverings, Günther chooses to display a pterodactyl-like metal bird in the house that he originally designed in 1983 for a famous branch bank called Z in his hometown of Graz, but then decided to keep for himself. "Nix Nuz Nix" is a sharply angular, frightening bird form with a long and pointed beak.