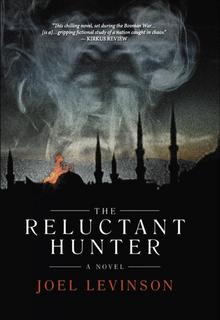 When you click to order, you will receive the 2019 version even though Amazon displays it as the 2012 version.

"The Balkan wars ended one of the longest periods of peace in European history. My company, Bavarian TV, reported extensively from the Bosnian War about unimaginable atrocities and victims of unspeakable violence. This war had an uneraseable impact on the collective consciousness of Europeans and others around the world. Joel Levinson's debut novel, THE RELUCTANT HUNTER, demonstrates a deep understanding of that conflict. But his novel is much more than a brilliant account of historical facts. It transcends the limits of time and place to convey the truth about human nature at it best and at its worst. Jusuf Pasalic is an unforgettable character. His coming of age unfolds in the chaos of war among 'brothers' and reaches its culminating point in the most crucial decision a human being could possibly face...and the unfathomable guilt it carries with it. And yet THE RELUCTANT HUNTER, is not only about despair and darkness, but also about survival, hope, friendship, and the healing power of love. Levinson's symbols are beautiful and his writing style is very much his own. I hope THE RELUCTANT HUNTER finds the large audience it deserves."

Most people who travel are eager to acquire information about their destinations in advance. They read books before booking a flight. Once there, they frequently refer to their travel pamphlets, and, if, on a tour, they attend every lecture. I go primarily to see; to soak up and digitally store whatever catches my eye. When I get home, I then do some research and thereby relive my visit, again and again, in front of my computer or TV screen. It's a different way to travel.